MERRY CHRISTMAS, CELEBSTALKERS!!! You’ve waited patiently and we will not disappoint you!! Celebstalk’s 1st Annual Mougar of the Year is JOHNNY DEPP!!!!

Ever since he first caught our gaze in Wes Craven’s A Nightmare on Elm Street as the hottie who got sucked into the mattress, we’ve been dreaming of him! Since then, he has appeared in countless movies and television shows and has rapidly become the most swoon worthy celebrity in the universe! While that alone may give us enough reason to name him our Celebstalk Moug of the Year, we won’t stop there! Settle in for the most epic mougalicious post ever on Celebstalk!!

Mini Bio: Johnny was born in Kentucky and raised in Florida where he dropped out of high school at the age of 15 to pursue his dreams of becoming a rock star. After being introduced to Nicholas Cage, he decided to try his hand at acting and the rest is mougar history! Since, he has appeared in a myriad of roles ranging from the ultra-eccentric Mad Hatter and Edward Scissorhands to playing a real life druglord to the world’s most beloved pirate. He has been awarded People Magazine’s Sexiest Man Alive multiple times, has opened for Iggy Pop and Duran Duran and has a nightclub in Estonia named after him, which is quite a step up from selling ball point pens (which he did before he acted). Nowadays, he is one of the most famous, beloved and fantasized about male celebrities on the face of the Earth! We love you, Johnny, you mougalicious son of a bitch! 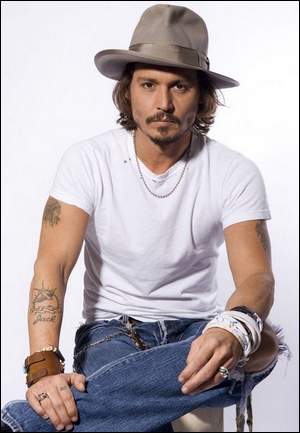 Why We Love Him (And Why You Should Too!): Hello! He’s JOHNNY FREAKING DEPP! Everyone loves this guy! Not only is he one of the most versatile actors in the history of the cinema, but he is also one of the most gorgeous! Almost anyone can be hot, but it takes something more to be THAT hot and still make you actually want to watch a movie and find out what happens. He is everything that you could ever want in a man. He has every big selling quality of all of our previous Moug’s in one beautiful package. He has the versatility that made us fall for Robert Downey Jr. in May, the perfect good looks and romance that made us crush for Edward Cullen in June, the sense of humor that made us rush to Rudd, the rugged good looks and strong body that made us beg for Gerard Butler, the distinguished, classic good looks of Gorgeous George in September, the class and sensitivity that made us crave Colin and the sexy mystery that we wanted from Denzel and more! There is no end to the things that we love about Johnny Depp, everything from his talent to his heart breaking good looks makes us love him and he has the personality to boot! He is the perfect man through and through and he just gets better every year.

His Mougability: This man can do anything! He takes everything you want and he makes it more than you could ever imagine! He is passionate, he is unique, he is multi-talented, he is sexy, he is sensitive, he is the “given.” It doesn’t matter who you are, where you are or what kind of man you like, you love Johnny and your man knows it. What’s better, is he can’t even be mad about it because he knows that’s just how it is. There has never been a woman on the face of the planet that has seen this man and not fell head over heels stupid in lust with him! And to top it off, he is really amazing at what he does. On a Friday night, you can pop in a Depp flick and be instantly entertained. Men want to be him, women want to be his slave. His is the total freaking package!

So Merry Christmas and Happy New Year’s Celebstalkers! We have had a lot of amazing Moug’s this year and Johnny takes the cake for Celebstalks 2010 Mougar of the Year! We love you Johnny! You were definitely worth the wait!!!

Wanna see more Depp? Hell yeah you do! Right now, you can catch him in theaters in his newest movie, The Tourist, where he costars with Angelina Jolie. He has at least 8 (that’s right Celebstalkers!!!) projects in the works, so we can tell you that you can expect to see much much more of him in the future! But until then….

Hey there Celebstalkers! Echo and Foxtrot here and we know you must be wondering where we have been! Well, as you know the end of another year is fast approaching, which many things here at Celebstalk!

You may also notice that we did not post a Mougar of the Month for the month of December…well..it’s all part of the plan, Celebstalkers! Since it is the end of the year and we know that you have all been very good boys and girls this year, we are preparing an extra special post for our Mougar of the YEAR!

The Mougar to top all Mougars from 2010!

We PROMISE it will be worth the wait!

Who do you think he will be?? We have had such tasty moug’s on our site this year, it’s hard to believe there could be one man to out-Moug them all, but there is!!

Please be patient with us while we get him ready for his big unveiling!!!! And comment below if you’d care to venture a guess!